The first map of the Moon is the work of a Dutchman. This is Michel-Florent Van Langren, an illustrious spherographer whose family is a cosmographer from father to son.

Michel-Florent was born in Amsterdam on April 27, 1598. His father was the official engineer of the Archduke Isabelle and Albert and, subsequently, of King Philippe IV.

When his father died, he took over from the King’s Court.

The King asked him to calculate the terrestrial longitudes in order to facilitate maritime navigation. To reach his goal, Van Langren studies the illuminations and obscurations of the mountains present on the Moon, using his telescope.

He took the opportunity to produce an extremely detailed map of the mountains, seas, and craters of the Moon. It even assigns names to each element to facilitate their recognition. We also observe that a sea bears the name of Belgicum.

This scientific work, called selenography, was carried out in 1627. But the King, impressed by the high quality of his work, financed the publication of his map. She is known today as Lumina Austriaca Philippica. Some copies can be consulted in the archives of the universities of Strasbourg and at the National Library of France.

It is the study of the surface and the relief of the Moon.

Despite a busy life and many projects, Van Langren seems tireless. He died at the age of 78 in 1675 after leaving behind many inventions. 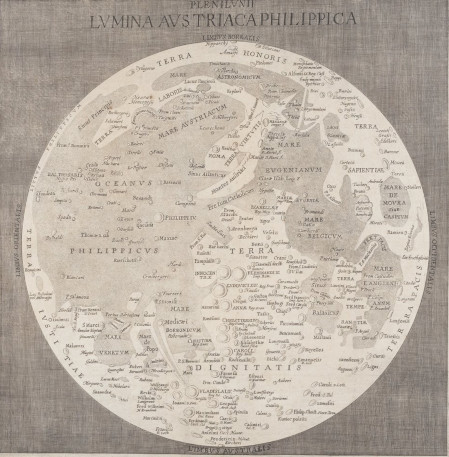